Spotlight: Our Writer in Residence 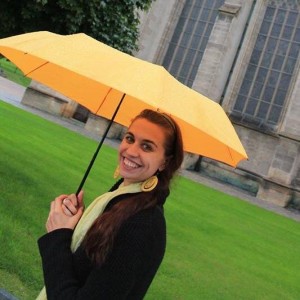 You speak quite a few different languages. How do you find creative writing in languages other than your first? Does it give you a greater understanding or appreciation for language?

I really love trying to write creatively in other languages. There is a greater challenge which comes with it, given less knowledge of vocabulary and grammar constructs, which restricts what you can write and it can actually be a very creative process to try and write something within those restrictions. Writing in German has given me a huge appreciation for everything the English language is. The fact that English has borrowed words from other languages throughout history to escape extinction and continue to prosper is incredible, and where in say, German, there is only one word to express something, in English there is a choice of dozens of words, each with a very slight difference in meaning. I respect English a lot more since I’ve been learning other languages.

You’ve written eSeries, book reviews, a YA novel, a picture book… Do you have a favourite form of writing? If so, what is it?

I really enjoy experimenting with forms I haven’t tried before, but I must say I really loved the process of writing the eSeries. I wrote to weekly deadlines, and got weekly feedback from my editors and re-edited an episode a week, too. I also narrated my most recent eSeries, and spent afternoons shut away in my wardrobe recording! I think that things can move so slowly in publishing, from the acceptance of a piece of writing to actually seeing it published, that you’ve already moved on to the next thing and that when the piece or book appears it is still exciting, but there is also a sense of “oh, finally!”. The eSeries was such a fast process from writing and editing each episode to them being published online and accessible to readers, that you’re still very much involved with the work as it is being published and read.

You’ve been quite successful in getting grants. Why do you think this is? What advice do you have for people wanting to apply for grants?

I have been very fortunate to have received a few grants, but for the ones I got there are so many I applied for and didn’t get! I think persistence is key. Don’t be afraid to keep going after grants, even if you’re unsuccessful the first few times. Seek feedback on your application if possible, and do your research. Spend a good couple of months before the application deadline getting quotes and thoroughly researching the costs involved in what you’re proposing to do. And make sure you’re passionate about what you’re applying to do, as that will shine through in the application.

In five years I hope to have grown Tongues from an online magazine to a digital and print magazine, and from there into a language and linguistics publishing company, and to be working full-time as a writer and editor.

In ten years’ time, I hope to still be working full-time as a writer and editor, and to have a few more novels published…apart from that, well, is a Nobel Prize in Literature asking too much?

Which of your writing achievements are you proudest of?

I’m proud of everything, because each achievement has given me the encouragement and support I’ve needed to take another step forward and another and another. I think I am especially proud of my picture book, What in the World?. I wrote it when I was fifteen for a school project and one of my good friends illustrated it. From there, we sort of found ourselves thrown into a self-publishing project and learnt so much along the way. Eight years on from when I first wrote it, we still get comments from people saying how much they love the book, and creating that book taught me so much about the writing and publishing industry. What in the World? gave me the confidence to not be afraid to try different paths or ideas in my writing and in getting published.

If you could live a day within a book, which would it be and why?

The Hitchhiker’s Guide to the Galaxy, because I’ve always been fascinated by space and travelling through space the way they do in that book would be the most awesome day out!

What is your writing process? Which parts do you find most difficult, and most enjoyable?

If I’m working on something with a deadline, I’ll sit down a couple of weeks before the piece is due and write out a complete draft in one sitting, which I’ll then revisit and re-edit right up until the deadline. Otherwise, if I come up with an idea which isn’t for anything in particular, I tend to stop what I’m doing when I get the idea (or if I’m at work, daydream about the idea all day and then rush home to start writing when I finish) and start writing it up straight away. I do write every day, but it’s usually something different every day. I don’t have a day set aside to focus solely on writing, which I do find difficult. My work roster changes every week and I only know my days a week in advance, so it is impossible to set a regular routine. It has been a lot better since I’ve been at the SA Writers’ Centre, because I dedicate one or two days a week on my days off to go into the centre, where I can just sit at my desk and throw myself into writing. The most enjoyable part of writing for me is when I lose myself in my laptop screen for hours at a time and the story is coming so fast that my fingers can barely keep up with my brain as I get the words down. It is such an adrenaline rush!

If you could undertake a mentorship with any author, dead or alive, who would it be?

Franz Kafka. I absolutely love his obscure writing, and how even though his characters experience the oddest scenarios in his books, somehow it all seems very much believable.

Want to support great programs and writers like this? Help out here.

2 Comments to “Spotlight: Our Writer in Residence”