Home > Interact & Community > Blog > The Best Interviewers in The World

The Best Interviewers in The World 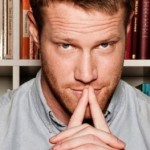 NB: Lou will be presenting ‘How to Interview Like a Journalist’ as part of the Teenage Boot Camp.

A writer who can’t interview is like a fisherman who doesn’t know how cast a line. It’s an essential element of gathering information; novelists, screenwriters, journos and memoirists all have to discover how to draw ideas and details out of people.

And what’s the best way to learn? By watching (or listening or reading)! I’ve compiled a list of the best interviewers in existence.

This multi-talented producer/journalist/creative director/man was at the helm of Enough Rope, an interview show which ran on ABC 2002 – 2008. His guests included celebrities as well as ordinary people. There is something about Denton that made every person reveal themselves and get raw in front of a live audience.

Why he’s rad: His eyes. Who wouldn’t want to pour out their story into those sparkling wells?

Watch him in action: Chatting to award-winning journalist Chris Masters about his daughter, who was diagnosed with cancer.

Leigh Sales is the bad-ass host of The 7.30 Report who is unafraid of taking on the Prime Minister. She is always ready for conflict and refuses to allow politicians to skim over issues; it’s almost as if she’s the only person in Australia who can hold the big guys to account. Sales has interrogated Scott Morrison, Joe Hockey, union leaders, and Burmese rights activist, Aung San Suu Kyi.

Why she’s rad: This is one woman who isn’t afraid to ask the hard questions.

Primarily a print journalist, Benjamin Law is the author of Gaysia, an exploration of gay subcultures in Asia. He has also written some phenomenal pieces for The Monthly and Good Weekend, like this piece on sexual abuse between siblings, or the profile on Pauline Hanson. He is also hilarious and has an exceptionally vulgar sense of humour so in short: you should all read him.

Why he’s rad: Law’s talent lies in exposing the humanity of every person, while still treating them with the utmost respect. Even the baddies.

Read him in action: Talking to meth users for Good Weekend.

While I may be the only 25-year-old I know who has Classic FM preset in my car radio, I’m not the only person who is a huge fan of Margaret Throsby. Her interviews are broadcast Australia-wide on Radio National, and she’s on at noon every weekday in Adelaide. My lady MT knows the goss. Every person she speaks to has achieved much in their lives, and Throsby seems to know more about them than they do.

Why she’s rad: She KNOWS EVERYTHING. Also: her voice is really nice to listen to. She could tell me a bedtime story if she likes.

Listen to her in action: Talking to blind marathon runner and disability advocate lawyer, Richard Bernstein.

Ira Glass is the host and producer of much-applauded US radio show, This American Life. Damn, does he know narrative. He is adept in detecting the essentials of a story and draws them out, slow and sure like a magician’s handkerchief, until we are hanging on the edge of our seat wondering if the locksmith did, in fact, unlock the door to the pretty stranger’s sports car.

Why he’s rad: Glass knows what fine details lead to a fascinating story.

Listen to him in action: Getting to know drug court in Georgia.

The host of Triple J’s current affairs program Hack runs every weekday at 5.30pm. Interviewees invited on the show could be experts or MPs or young listeners calling in. Hack is excellent at getting perspectives from the street.

Why he’s rad: The show only runs for half an hour, people, and the 6pm news don’t stop for no one. Someone has to crack the whip. Tilley interrupts politicians, ranters and raconteurs in fine style.

Listen to him in action: Examining dating, gender and power.

What? You’ve never heard of Louis Theroux? The BBC journo who went to America to talk to all the crazy people? The man who spent time with a family from Westboro Baptist Church? Who stayed at a legal brothel in Nevada? Whether you know him or not, there’s no arguing: Theroux has truly perfected the poker face. He arranges his features carefully when a subject is incredibly racist or hateful, and nods thoughtfully. It makes the interviewee feel safe, and allows them to truly reveal their prejudice.

Why he’s rad: He knows how to make people feel like he’s on their side.

Watch him in action: Spending time with ‘The Most Hated Family in America‘.

2 Comments to “The Best Interviewers in The World”