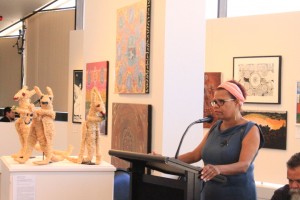 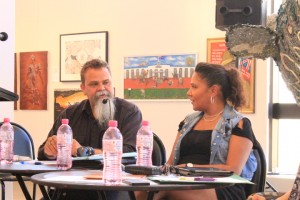 Nicolle Orr has always been interested in theatre and performing, from primary school to  high school plays. She moved to Brisbane when she was 21 and studied performing arts at the Aboriginal Centre for Performing Arts and was involved in various student productions, singing, dancing and acting. She studied drama at Flinders University where she did various productions as part of her assignments. Branching out she had the chance to be involved with the Adelaide Theatre Guild’s production of Holy Day late last year, where she played Linda. More recently Nicolle was invited to be an actor in ACTNOW theatre forum style around racism in schools, helping construct the piece and playing a bullied Aboriginal boy in the play. She has since begun dabbling in writing and looks to pursue the avenue of writing for future performative opportunities.

Matthew is a local artist who has worked as a presenter for many years as an MC for the Spirit Festival and Survival Day. Matt also works predominantly as an actor having performed for local companies such as Stone/Castro, Independent Theatre, Karrakarinya Theatre Collective and Kurruru.

Stephanie is a young adult novelist with a passion for the dramatic and supernatural, she has written six books and is in the middle of her first childrens book. When her nose isn’t buried in a book or in a laptop you can find her teaching Ngarrindjeri culture alongside her family or writing songs with her cousins.
Ali Cobby Eckermann

Ali Cobby Eckermann’s poetry reflects her journey to reconnect with her Yankunytjatjara / Kokatha family, first published in ‘little bit long time’ by the Australian Poetry Foundation in 2009. Ali attended the Ubud Writers & Readers Festival in Bali in 2010 and in 2011, Oxford Uni Press published her first verse novel His Father’s Eyes.

Ali coedited an Aboriginal edition of Southerly with Lionel Fogarty and she has established an Aboriginal Writers Retreat at her home in Koolunga. Ilura Press Victoria published her poetic memoir titled Too Afraid To Cry to much acclaim in 2013.

Edoardo Crismani is a member of the South Australian Aboriginal Torres Strait Islander Story Tellers and Writers Group. A published poet, writer, musician and emerging filmmaker, he was awarded Writer in Residence (Emerging Artists) at the South Australian Writers Centre in 2012.

One of his short drama films Just Be Yourself airs nationwide on NITV and was selected for the Dunedin Reels on Wheels Festival March 2014.  He recently was commissioned by NITV to film a short documentary “Barbara’s World” about his mother’s story that will air later this year and is currently developing a documentary on his Grandfather’s life as well as a slate of other projects dealing with contemporary life as a descendant of Aboriginal and migrant lineage.

Edoardo creates videography work at the University of South Australia as well as for the Australian Indigenous Mentoring Experience (AIME).

Shane Devine born 03/05/1961 is also known as “THE SAY”. Originally from Redfern Sydney, Shane is now a permanent resident of Adelaide. From a young age Shane became a state ward of NSW and feels no connection to that land. He has been writing poetry & songs since 1977 Shane’s song writing style is considered as minimalistic, humanist pop. An evolving strong poet is inspired always by William Shakespeare feels the permission to be art with a voice and heart beat in word. Shane avidly believes that writers are the paragons of art. Shane keen to continue songwriting and melding music with his words is looking for a band to assist him in the transitions of his say. Shane believes the audience is the other half of his art. Shane prompts others with the “Dare to speak your truth.”

Natalie Harkin is a Narungga/Anglo woman, a member of the Chester family from Point Pearce in South Australia.  She has worked in the Indigenous higher education sector since 1995 at Wilto Yerlo and Yaitya Purruna at the University of Adelaide, the David Unaipon College for Indigenous Education and Research at the University of South Australia, and most recently Yunggorendi First Nations Indigenous Education Centre at Flinders University.  She is currently enrolled in a PhD where her research centres on her Aboriginal family story and the Aboriginal State Record archives. This research weaves together a love of storytelling, activism and resistance-poetics through art and literature, and how Aboriginal writers and artists engage critically with the archives weaving her own creative-nonfiction and poetic-prose throughout the research.

She has been an active member of the South Australian Aboriginal and Torres Strait Islander Storytellers and Writers Group sharing her poetic-prose at conferences, local events and festivals.  Her greatest love is her immediate and extended family including her partner and two young children.

Alexis West is a Birri Gubba, Wakka Wakka, Kanak and Caucasian woman who is a Writer, Creator, Collaborator, Artist, and Facilitator.  She convened the 2012 & 2013 Writer’s Program for the Spirit Festival and Our Mob and has worked with No Strings Attached Theatre of Disability with her show “Knowing Home”. Her piece “Black Wheels” was shortlisted for the 2012 Edward Albee Inscription Scholarship and another work, “Intervention” was shortlisted for the Yellamundie Playwriting Festival 2013 and shown at the 2010 Adelaide Fringe Festival. Her play “Minno and Medika” was performed at the 2009 Come Out Youth Festival. A first prize was awarded to her from the poetry competition ‘Open Your Mind’ and then published in ‘Mind Frames’ 2011. Her short film “Jump & Bounce” debuted at the 2011 imagineNative Film Festival in Toronto.

She is currently writing a documentary “Kings Seal” and a feature film “Black Hack”.  Together with artist Marijana Tadic, Alexis was commissioned to create a major sculpture at the Greenfields Wetlands in 2013 called “Together Woven”. Alexis is an active member of the South Australian Aboriginal Torres Strait Islander Storytellers and Writer’s group as well as a proud working party member of FNAWN (First Nations Australia Writers Network) and reports for NITV “Around the Traps”.

Tania is a Kokatha, Mirning and Anglo-Australian woman from the west coast of South Australia. She has a Bachelor of Arts from the University of Adelaide and lives in Adelaide with her daughter. Tania adores writing. When not working in government administration, she is passionately writing a novel.