Serialised fiction was once the way people read fiction, published in instalments in newspapers or magazines. Dickens’ work first appeared in serialised form, with fans anticipating each new instalment of his work. Over the years, serialisation has given way to completed novels, but with the advent of the internet and ebooks and epublishing, the format is being popularised all over again.

Serialised fiction is perfect for online publishing as people are used to reading smaller chunks of text, such as blog posts, on the internet. In 2012, I had the opportunity to write my first eSeries. Small US publisher BigWorldNetwork.com were looking for stories which could be told in seasons of twelve episodes, with one episode published online weekly. I had recently completed a first draft of a book which I thought would work exceptionally well as an eSeries, and decided to submit.

Structurally, writing an eSeries is not that different from writing a novel. Each episode equals a chapter, and the episodes need to be contained within themselves, or the leave the reader hanging on the edge of their seats to entice them back for the next episode. Likewise, the plot needs to make sense over the course of the entire series. The main difference I found between writing an eSeries and writing a novel was the writing process itself.

I wrote my first eSeries, Sleepwalking, from my first draft of the novel. I used the draft as a skeleton outline for the series and rewrote the story into episodes each week. Usually, I don’t edit as I go when I write; I prefer to get it all down on the page and go back and edit once the entire manuscript has been written. With the eSeries, I was forced to write and edit my work weekly, episode by episode. The rolling deadlines of submitting one episode per week forced me to get the writing done, and there was no time to spend weeks pondering solutions to the plot. This could be very stressful, especially when the next deadline was looming and I had no idea how to fix the situation I’d written my characters into, but at the same time, the deadlines forced me to address the problem and come up with a solution quickly.

One of the advantages of writing in this way is that by writing and editing one episode per week, completing a novel just creeps up on you. For a three-season series, it is a nine-month process from start to finish, including the editing, which is around the same amount of time it takes to write a novel. The difference is that over those nine months you are continuously engaged with your work as a writer, still finishing the series as the first episodes are being published and readers are starting to read the story.

I recently finished writing my second eSeries, Sprint-mazing, and I found the process even more enjoyable the second time around. I’ve discovered I really love this serialised way of writing fiction, and once the first episode is published online for readers, you’re committed. It is the perfect motivation to keep writing.

Serialised fiction can be a great way to get readers returning to your blog, and the writing process breaks up a novel-length work into smaller, manageable sections. If you’re struggling to complete a novel-length work, why not approach it as an eSeries instead? It may just be a method which works for you. 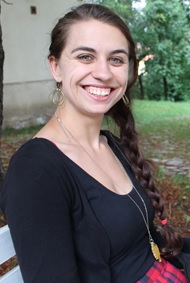 Raelke Grimmer – our current Writer in Residence –  is a writer and linguist. She graduated from a Bachelor of Creative Arts in Creative  Writing at Flinders University in 2011 and completed her Master of Arts in Applied Linguistics at the University of Adelaide in 2013. Raelke wrote her first picture book, What in the World?, for a high school project, and soon found herself in the midst of a self-publishing project. She writes book reviews for Lip Magazine, and was a Buzzcuts reviewer during the Adelaide Fringe Festival for Express Media in 2012. Raelke wrote a young adult eSeries, Sleepwalking, for small US publisher BigWorldNetwork.com in 2012, and in 2013 Sleepwalking was published as an ebook, paperback and audiobook. She recently completed her second young adult novel, Sprint-mazing.