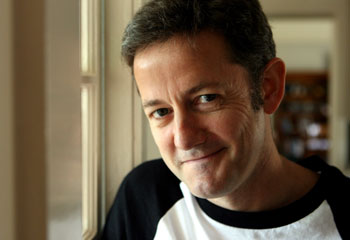 While navigating the streets of Sydney from one festival event to the next, author of 48 Shades of Brown, Bachelor Kisses, and most recently, Analogue Men, Brisbane’s Nick Earls speaks to Madeleine Manglaras about the Sydney Writer’s Festival, the joy that is Netflix and the difficulty of sourcing good quality pistachio gelati.

How many festivals have you been involved in?

Over the length of my career, certainly over a hundred. Most of them in Australia but not all. I’ve also been to Prague, various festivals in Canada, New Caledonia, but a lot in Australia. State capitals and regional festivals.

Do you ever get sick of it?

Not at the moment. One of the things that can be really nice about (being a writer) is that once you adjust to the two extremes of it, you realise its actually nice. You get over the normal anxieties of the introverted author who would like to be at home. Over the course of a year it will mean I will have time at home, writing fiction during my work days, living entirely in my own head; and if I did that every workday of the year I think I would go a bit crazy. So it’s actually good for me, that I have lots of time when I concentrate on writing, but then a block of time when I use my brain in a completely different way. Also, I enjoy travelling and meeting people who have read the books, and at festivals, catching up with other writers. One of the things I’ve learned, is that writers, even when they become good friends, we’re awfully slack trying to catch up with each other and we actually need something like a festival run by highly organised people to put us in the same room together. So it’s great. I’ve got these friends, who I never plan to see, who live in different places, and two or three times a year, we turn up and there we are, in the same room again.

This morning you ran a workshop on character development. Who decides the topics of the workshops you run? Do the festival organisers put it to you, or do you say, ‘hey, I’ve got this idea…’

It can go either way. In case of this one, and more usually, they’ll approach you and say, ‘Would you be interested in running a workshop and if so, what would you do?’ That’s when I’ll get to pitch something and that’s probably easier for me and more comfortable because I can develop a workshop like the one I did this morning. If I did nothing but do that workshop every day of the week it would start to do my head in by about Thursday. If I do that workshop a few times a year then each time I do it I can get right into it and enjoy it. I’ve done it quite a few times so I’ve refined the process so I know I’ve got something that works to some extent, and festivals know that if you’ve got something that’s road tested that hasn’t been done to death in their town, then it’s probably a good idea.

Of all your characters, do you have a favourite? I know it must be hard – like picking a favourite child or favourite gelati flavour.

Yes, and the good thing is I’ve only got one child so I don’t ever have to make that choice. The gelati though, that can be a challenge. Some people’s pistachio isn’t as good as other people’s pistachios, same with the tiramisu. What can sometimes happen is you plan, write and publish the book and if a lot of people read the book you can end up having lots of conversations about that character, which is an excellent thing, but it changes your relationship with that character because it’s not a character anymore, it’s the experience of lots of people reading that character. There’s one novel I published in 2006 called Monica Bloom, a small novel about a guy in his last year of school who meets a girl and is desperately interested in her and circumstances come between them. I liked him. And I felt really quite attached to him and I haven’t had thousands of conversations about him so that relationship hasn’t changed as much.

Is that a good thing?

It is. In another sense, it would be a better thing if I’d had 5,000 conversations about him because 100,000 people bought the book. That’d be good too.

So is it tiramisu or is it pistachio?

Oh, if it’s Mossimo’s in Noosa its tiramisu, because it’s brilliant. And, look, some people do a great pistachio but it’s not often the best. It wouldn’t be anything fruity, or anything too chocolatey. I’m into more, coffee, caramel—that sort of spectrum.

In today’s music age, there’s a lot of sampling occurring. Do you feel like the same thing can happen in fiction? And how do you avoid telling the same stories you’ve read and enjoyed by others?

That’s a really interesting question and I’m not saying that because that’s what I sometimes say in bad radio interviews when it’s an awful question and I want to amuse myself by complimenting them. It’s interesting, because to some extent, its unavoidable and one of the worst things you can be as a writer is a plagiarist. With two million books in the Kindle store, ten million on Amazon and many millions more coming into existence, you’re less and less likely to fluke a completely original storyline. You expect writers to be readers and what you read helps shape you as a writer. There’s nothing wrong with learning from something and acknowledging that sometimes in the work. When I had a novel called The Fix published in 2011, I thought I’d have one character who would be my narrator but there would be this fascinating character close to him who we would never really get to know. It would keep suggesting that we did know him, but then he would change. It’s a really interesting model to work with, but then I thought, isn’t that the model in The Great Gatsby? So rather than being put off, I went and read The Great Gatsby several times to work out some of the things that Scott F. Fitzgerald did and I knew I was writing my own story. The details of the story and the characters were completely different, but it makes sense to learn from people who’ve done things really well.

So it’s okay to acknowledge that you’ve been inspired by another work in order to create an original story?

Tell us a bit about the next event you’re participating in on ABC radio. You mentioned spinning a game show wheel made of chocolate?

Yes, that’s what I’ve been told! That’s on 702 ABC Sydney, going out to regionals as well. Dominic Knight is hosting afternoons today. He normally does evenings but he came up with the idea that since this was a writers festival there should actually be some writing on his show and he would get me on to attempt to write a children’s story in two hours taking prompts from the audience.

That is a lot of pressure.

It is, it’s ridiculous pressure and it was a stupid thing to say yes to. My brain is fried after a three-hour workshop so I’m approaching it in not my freshest state. However, it’s one of those things; after a hundred and something festivals, when someone pitches to you a wacky idea, you just say ‘yes’.

Well, I guess it’s like you said before, you’re doing something different with your brain.

And it’s broadcast live as well?

That makes it even better doesn’t it?

There’s no net. There’s no escape. And of course it’s only going to be better if ridiculously bad things happen in the process of me writing the story. If it works totally smoothly and I come up with a clever story it’ll be a lot less interesting.

Who are your favourite fictional characters currently?

At the moment I really like Frank Underwood from House of Cards. I’ve just binge-watched series three. He’s a really interesting character and oh, okay, here’s another character I really like from another piece of binge viewing: Louis Lit, a character played by Rik Hoffman in Suits. Suits is very good. Because they’re both available on Netflix there are, being like, sucked up in binge amounts at my place.

You recently wrote an entry on your blog about the decline of reading. Are you currently reading anything?

I have just read Wayne Macaulay’s book Demons. We’re on a panel this afternoon. The more I read it the smarter I realised it was, although I didn’t think it was anything but smart to start with. If you just read it from a reader’s point of view, it delivers, but you’re not questioning how or why it delivers. Whereas when you think about it from a writer’s point of view, you start to realise some of the very clever things he’s done. I’m also now reading a book from about fifty years ago from Anson Cameron called Tin Toys. He’s written a number of novels and at least one collection of short stories and I had Tin Toys on my bookshelf at home and I hadn’t ever read it. I don’t know how it got there. He’s a very good writer, another book that is really well done.

In today’s technological age, how do you balance reading with the infinite entertainment technology that is readily available for you to procrastinate life away?

Exactly, how do any of us? The biggest issue for me is that it’s an issue for another several billion people as well. A couple of years ago the world video gaming industry hit 60 US billion dollars a year. That’s a lot of money that’s not being spent on books and not a lot of time that’s being spent on them either. When Gangnam Style was watched for its billionth time, that’s 50 million hours of human life into watching one dodgy video. If a fifth of that was spent on reading books—that would be 10 million hours, at ten hours a book, it’s a million books that didn’t get read because of one video – and there’s not only one video on YouTube. So, what do we do? And what do I do? I mean, I do watch lots of Netflix.

But you can get ideas for your writing from television?

There are some great stories, so I do learn from that. Having just picked up Anson Cameron’s Tin Toys, I realised, my God, he’s a really good writer. I want to read this. The right book makes it a priority. Then I’ll push other entertainment aside despite how alluring it might be. I think what we’ve got to do as writers, is try to write the right book and let people know about it and hope they tell their friends. Word of mouth is still the biggest, most powerful force in selling books. If you don’t get it, your book fades away very quickly, and if you do get it, then things are looking a lot better.

Good luck with the chocolate wheel. I hope you get it eat it.

Thanks. First I’ve got to find it.

Disclaimer: the wheel was not made of chocolate and therefore not recommended for consumption.

Madeleine Manglaras is a volunteer at the SA Writers Centre, in her final year of a Bachelor of Arts degree in Creative Communication and currently writing her first full length novel. She comes across as relatively sociable although most of her friends are either feline or fictional.