A Moment with Finn

Meet Finegan Kruckemeyer, exceptional playwright, who will be joining us with this intriguing Writing Worlds within Worlds 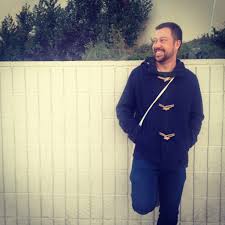 I’m not sure there’s enough drama to warrant an equivalent work of fiction. It would have to be something about people quite contentedly moving through their lives, raising a family and tending a garden in a nice community, while doing a job they very much enjoy. Not exactly a riveting narrative arc.

‘I’d rather learn from one bird how to sing, than teach ten thousand stars how not to dance,’ ee cummings.

Apply some form of regimen to what you do – don’t be the artist waiting for the great idea to find you, or great technique to suddenly be acquired. Work on it like you would something you love (don’t do it if the love isn’t there). Be proud of the ideas you’re generating now and take ownership of them, but be prepared to see them bettered and outclassed as you progress.

Don’t expect wealth initially and at first work hard, and for little, and with everyone. But once you’ve reached a point where you feel you’ve been a diligent apprentice for a suitable period of time, then work to make the art support you. Treat it like a job, and be accountable like it is a job, and ask those who would employ you to recognise it as a job.

Have a routine that pleases you – three in the morning and wired, or 9-5 each day, it doesn’t matter, so long as it’s yours and it works (mine’s the 9-5 one).

Have a guild, or an industry body, to watch your back if anything silly happens.

Love the art enough that you would stand up for it. But don’t love yourself as artist too much that you would fight belligerently for an idea that doesn’t deserve it just because it came from your mind.

And (as a woman who is older than me in years, and wiser than me in mind, told me once) let the art be a wonderful, pleasurable, absorbing thing that you do. But don’t let it be everything you do. Build a life that you love, care for the people you love, care for those around you who need it, be cared for in return. Art is a truly amazing thing, yes – but it shouldn’t come at the expense of that.

The opportunity to write – it’s a great joy and I love that it serves as my career also.

And, specific to children’s theatre, I love the collegial nature of the sector, and the fact that there’s such wonderful sharing of knowledge (between older and younger, successful and emerging), and friendships in cities around the world.

For the past decade, it’s been very Monday to Friday, 9-5 for nine months of each year, alongside travelling to work with theatre companies and universities for the other three. But seven months ago my son Moe was born and now the days have a lot more fluidity to them. I still enjoy the regimen of good blocks of time at my desk, but must admit to loving familial cocooning more, so am still discovering how to best marry the two.

A writer – always a writer.

Writing less new commissions and instead offering up more preexisting works to companies to produce. Writing some film and some prose alongside the plays. Still feeling the joy I do whenever imagining ideas, which I’m happy to say hasn’t yet diminished.

How did you decide that this was the career path you wanted to pursue?

I loved words (both the taking in and typing out) since I can remember. And I discovered a love of theatre upon moving to Adelaide aged eight. The wonderful artists at Urban Myth youth theatre, plus many besides, supported these burgeoning passions and steered me into the job I now do. Those inspirational Adelaide creatives, who were so generous in my teens and early twenties, deserve much thanks.

Who are people you admire/emulate/learn from?

Sorry – inadvertently touched on this above. Personally I’ve learnt from artistic mentors and non-artistic friends. The former was a more conventional bequeathing of knowledge and time. The latter is a more subtle form of assistance – as my audiences are predominantly non-artists (though of course in each, creativity resides), it’s these opinions I tend to find most helpful. They respond to story not as a learnt thing, but as a felt one, and their feedback is always broad and rich.

What are your hopes for the industry?

Continuing (and increasing) support of emerging and young artists. A well-facilitated conversation between experienced professionals and newer counterparts, with both reaping the benefits of being listened to. In theatre, more commissions for female, non-Anglo writers (not me, basically), and those with different perspectives/cultural contexts. More focus on the what (the story, the content) and less on the how (the technology, the means of delivery).

What do you feel has been your best/most favourite achievement in your career so far?

Seeing moments of joy or pathos resonate with an audience. Since 2011, making an equivalent career in the US which taps into another theatrical market, and sees me able to spend some time each year living and working alongside American friends.

What barriers have you had to overcome to write?

Very few – I’ve been, and continue to be, incredibly lucky. Initial poverty, but I seldom worried about money when I didn’t have it, and similarly now that I do. An initial inability to craft a story, but I wrote more and am learning with each new script. An initial fear of the writer’s presence in a development room, but nurturing producers and directors emboldened me over time.

How has your writing changed since you’ve become a parent?

Not sure yet – I’m still in the process of finding out.